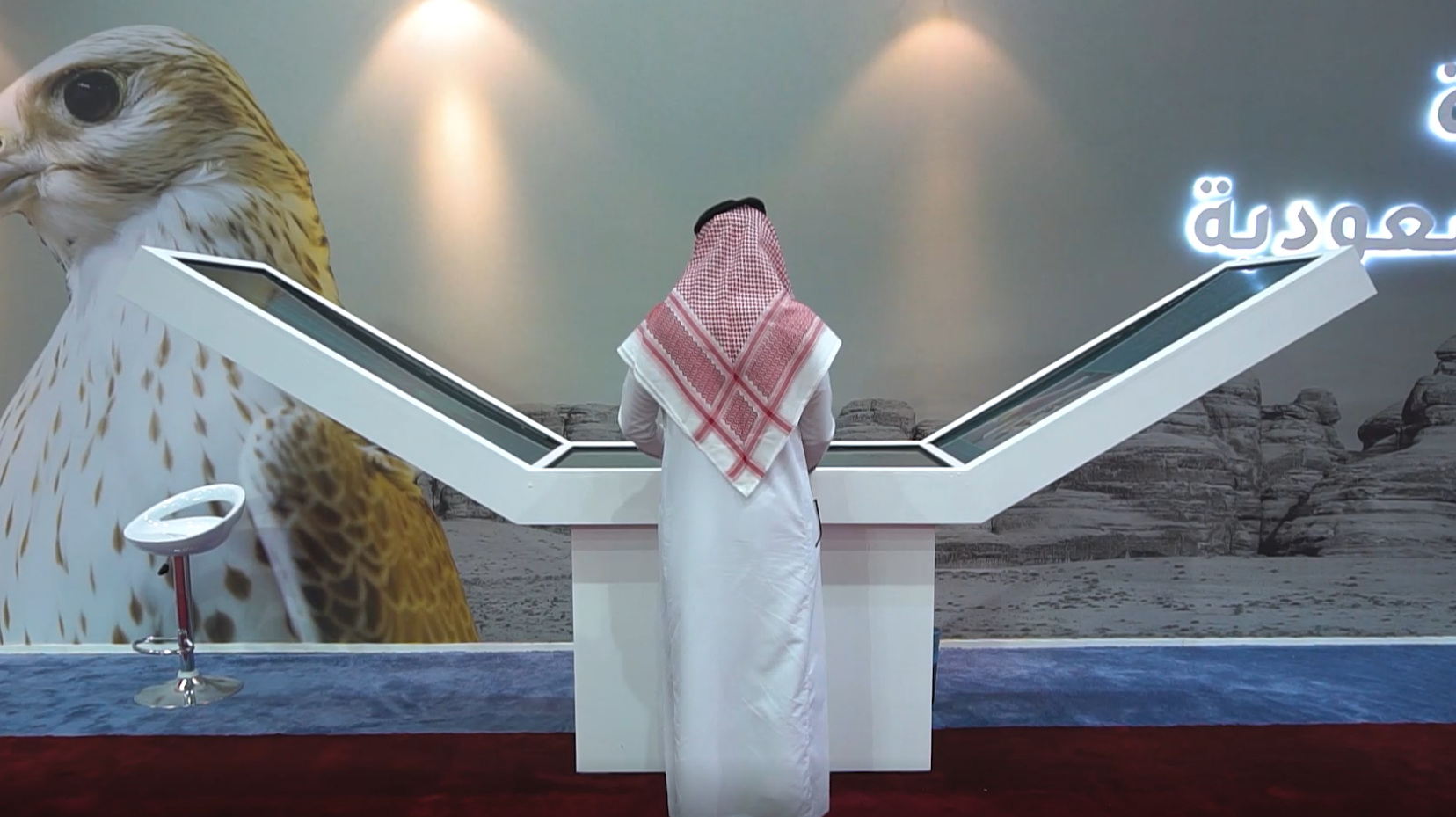 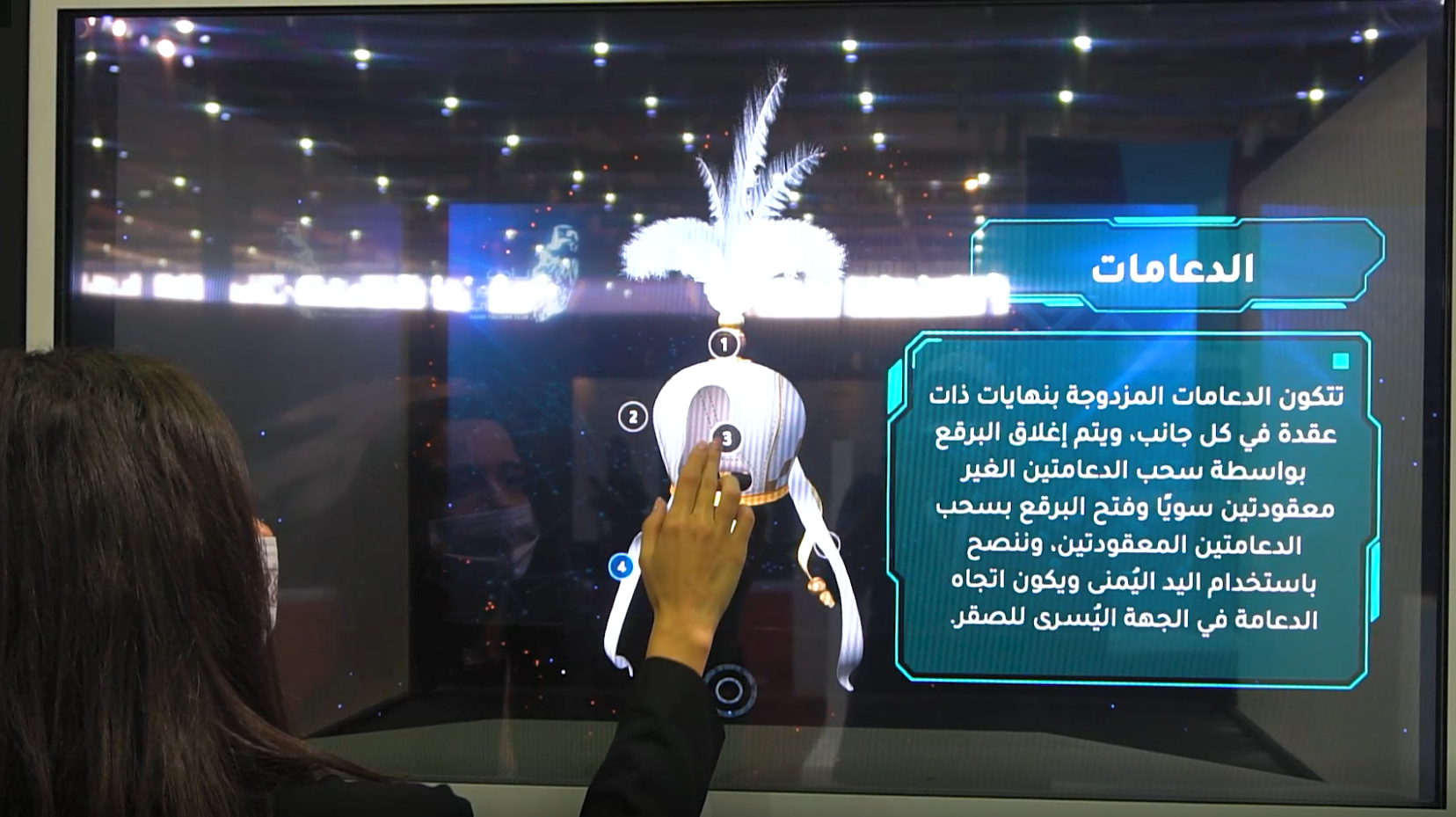 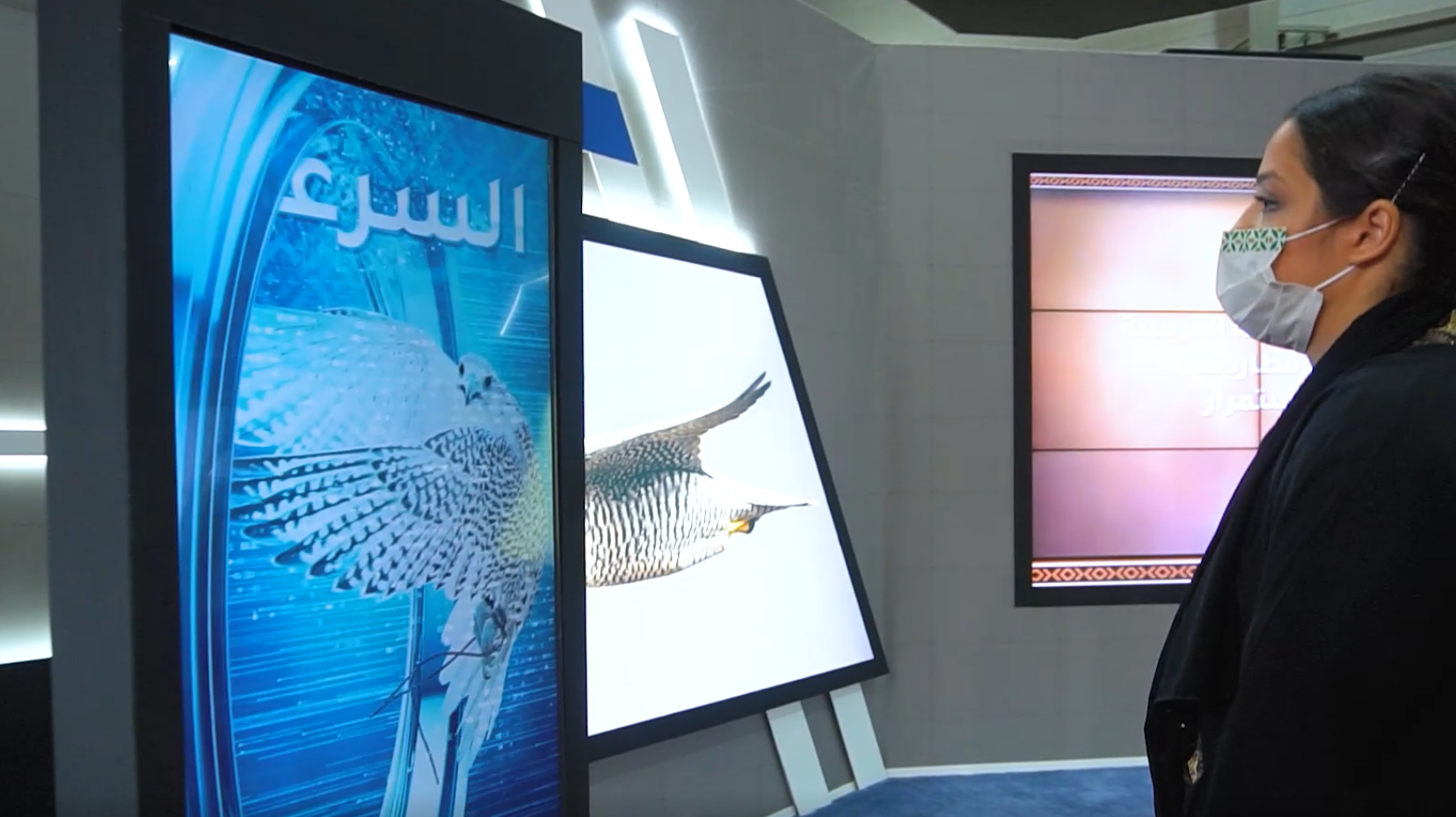 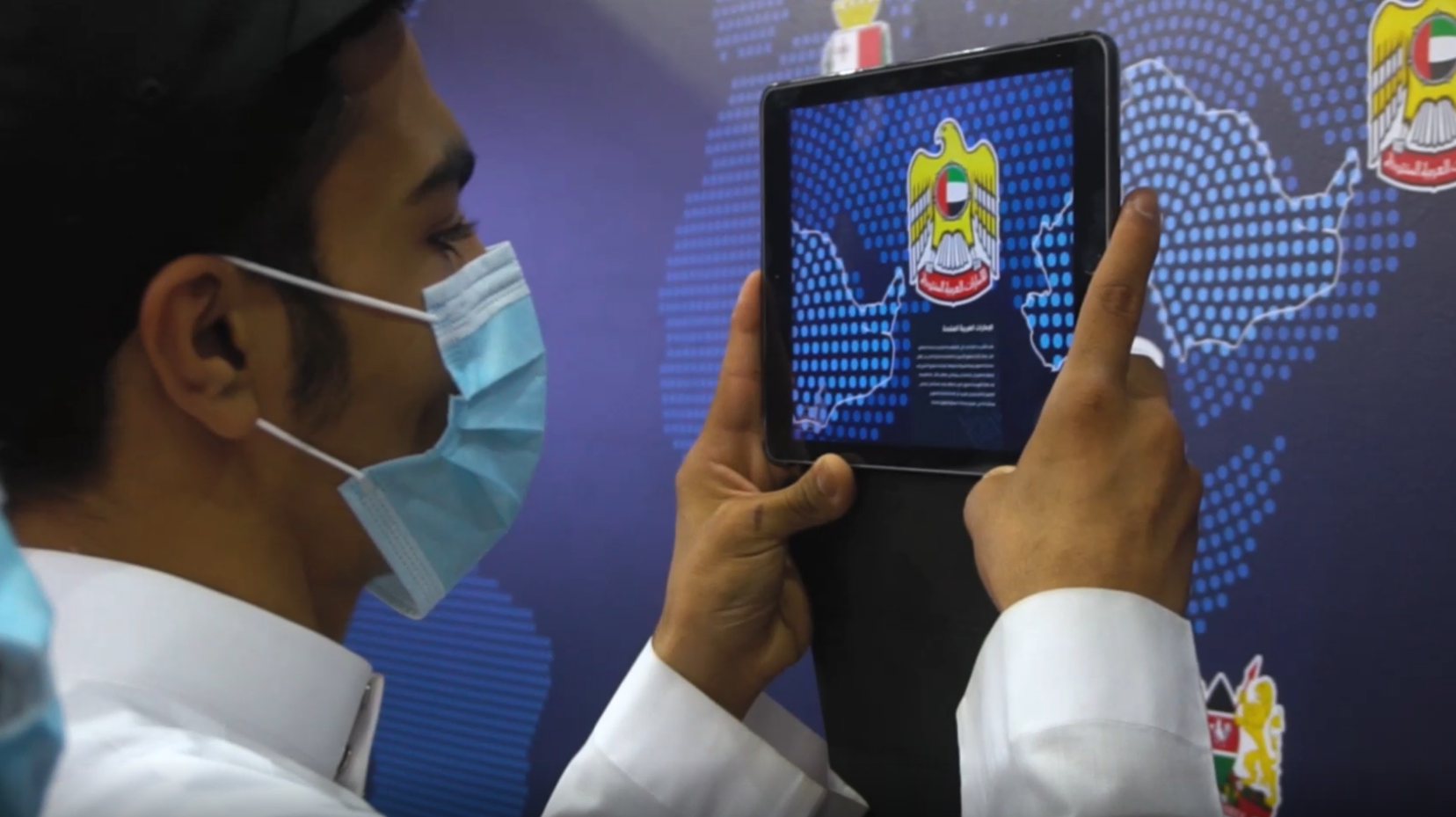 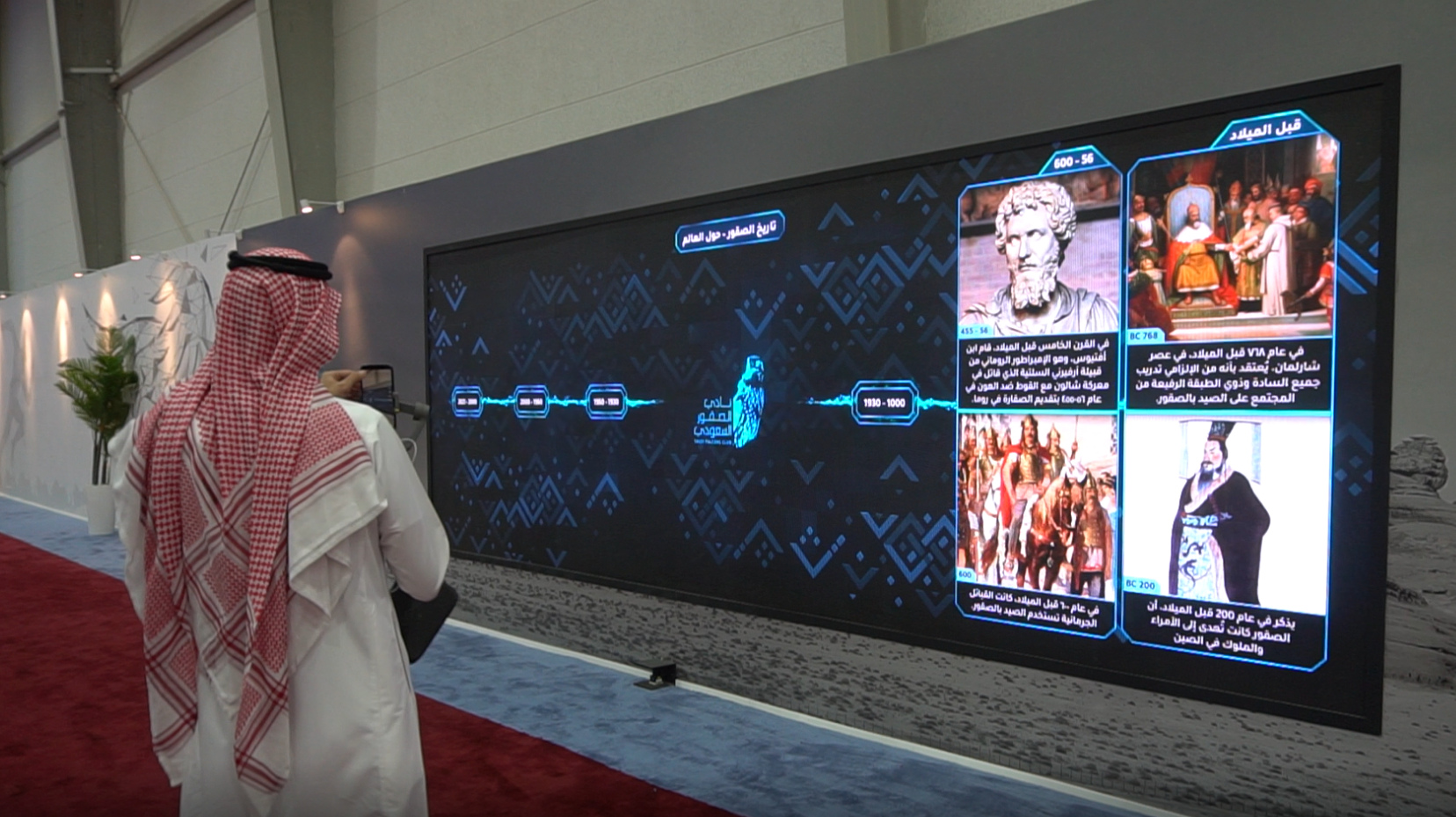 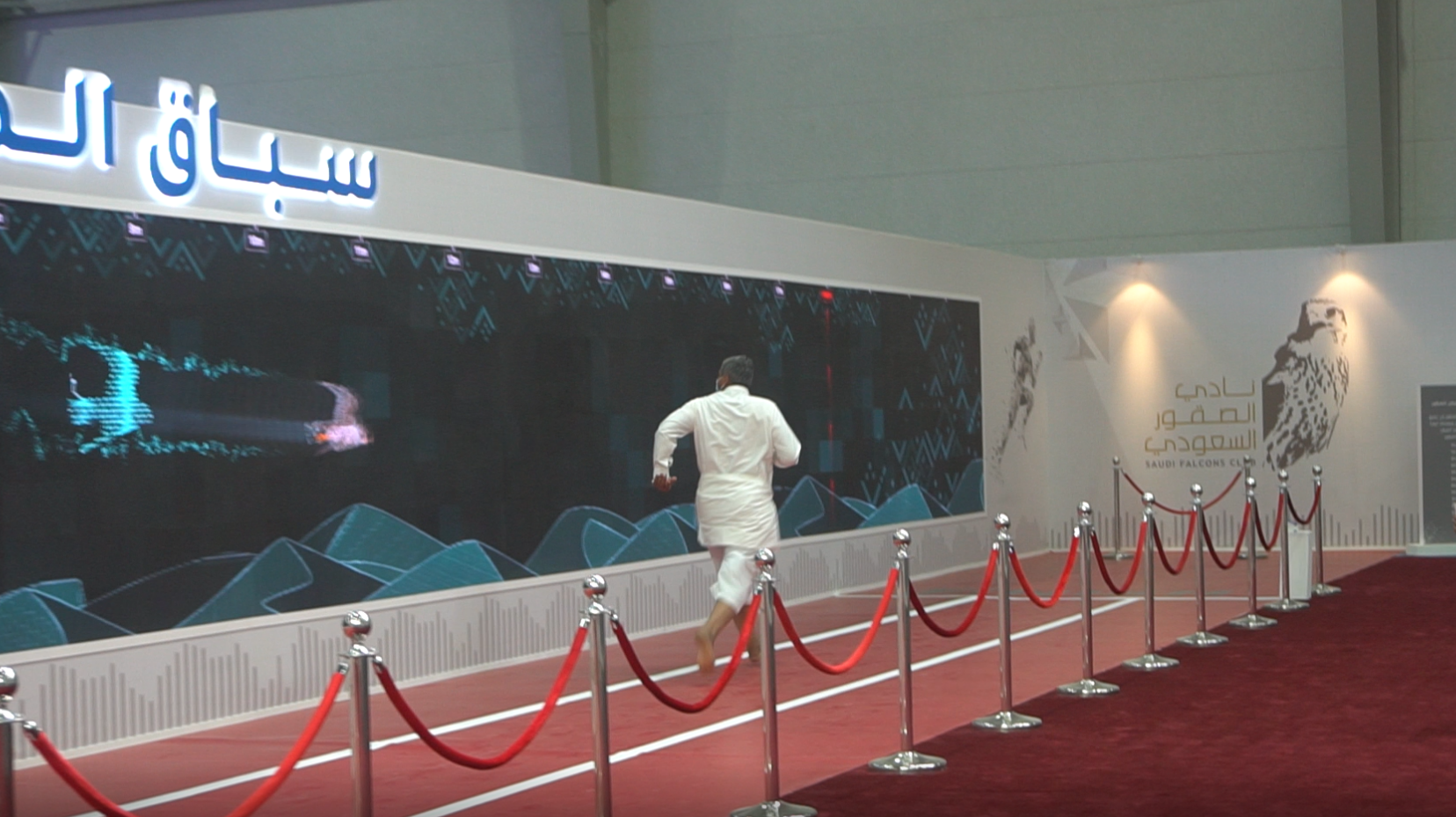 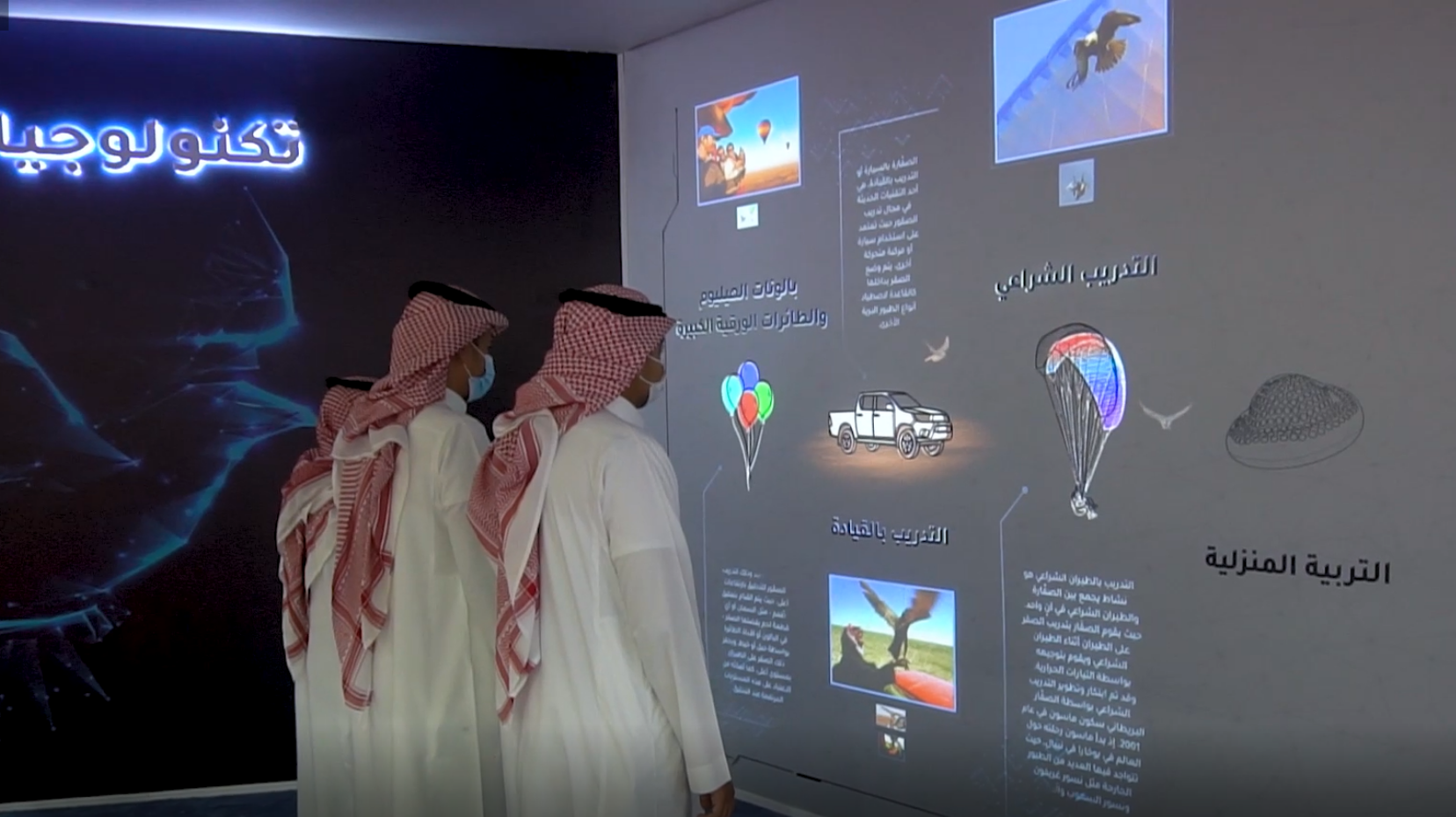 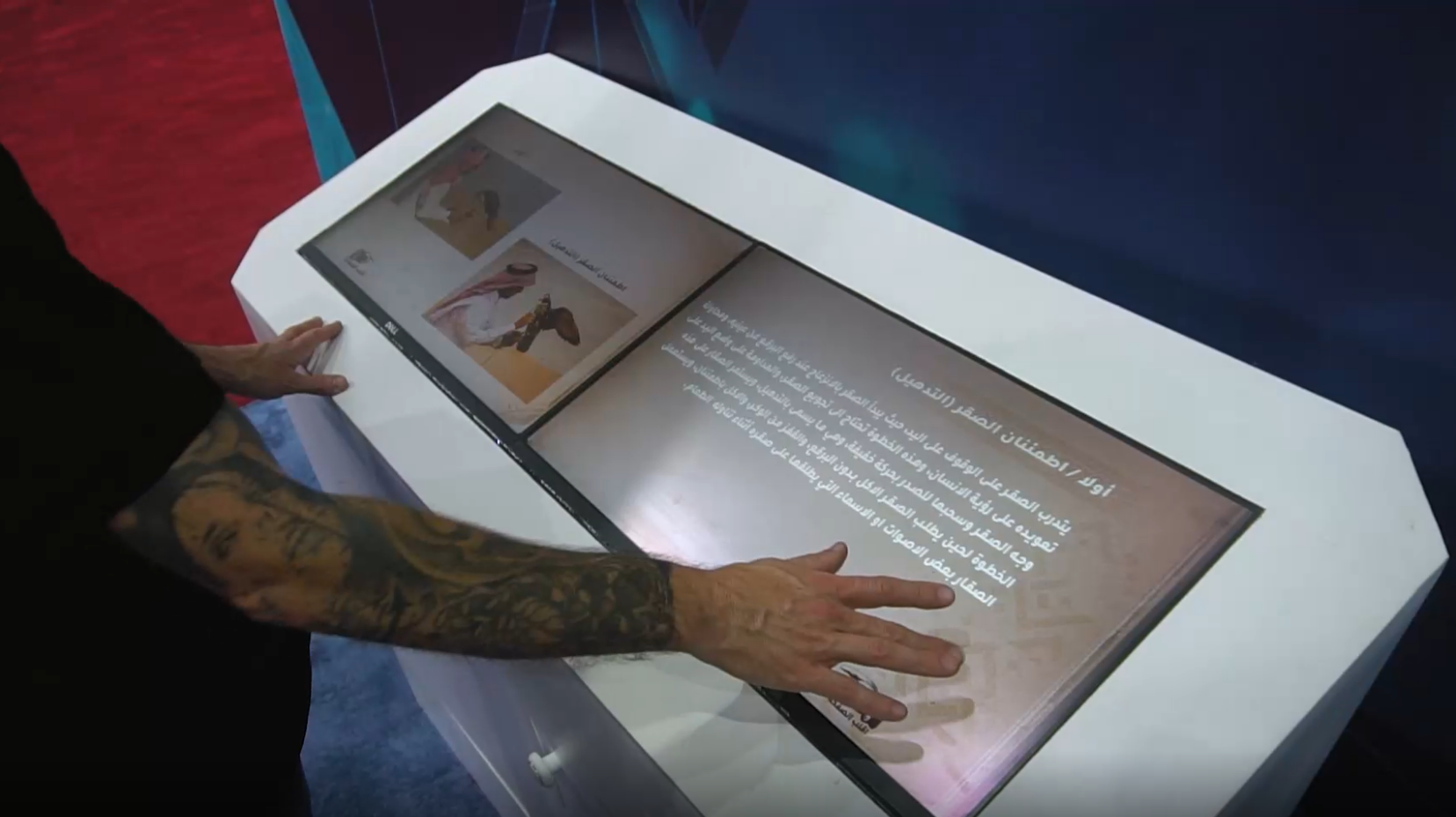 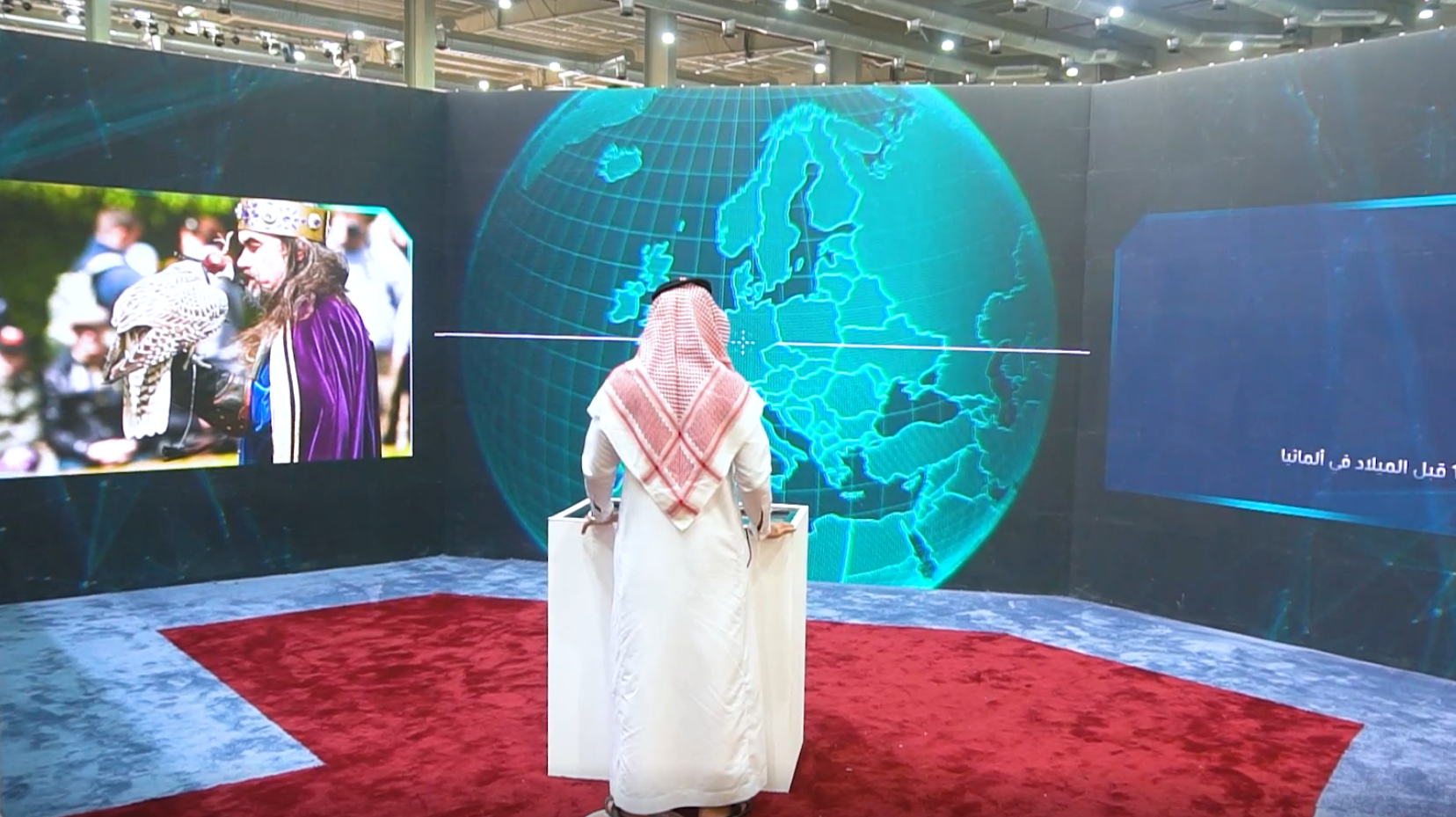 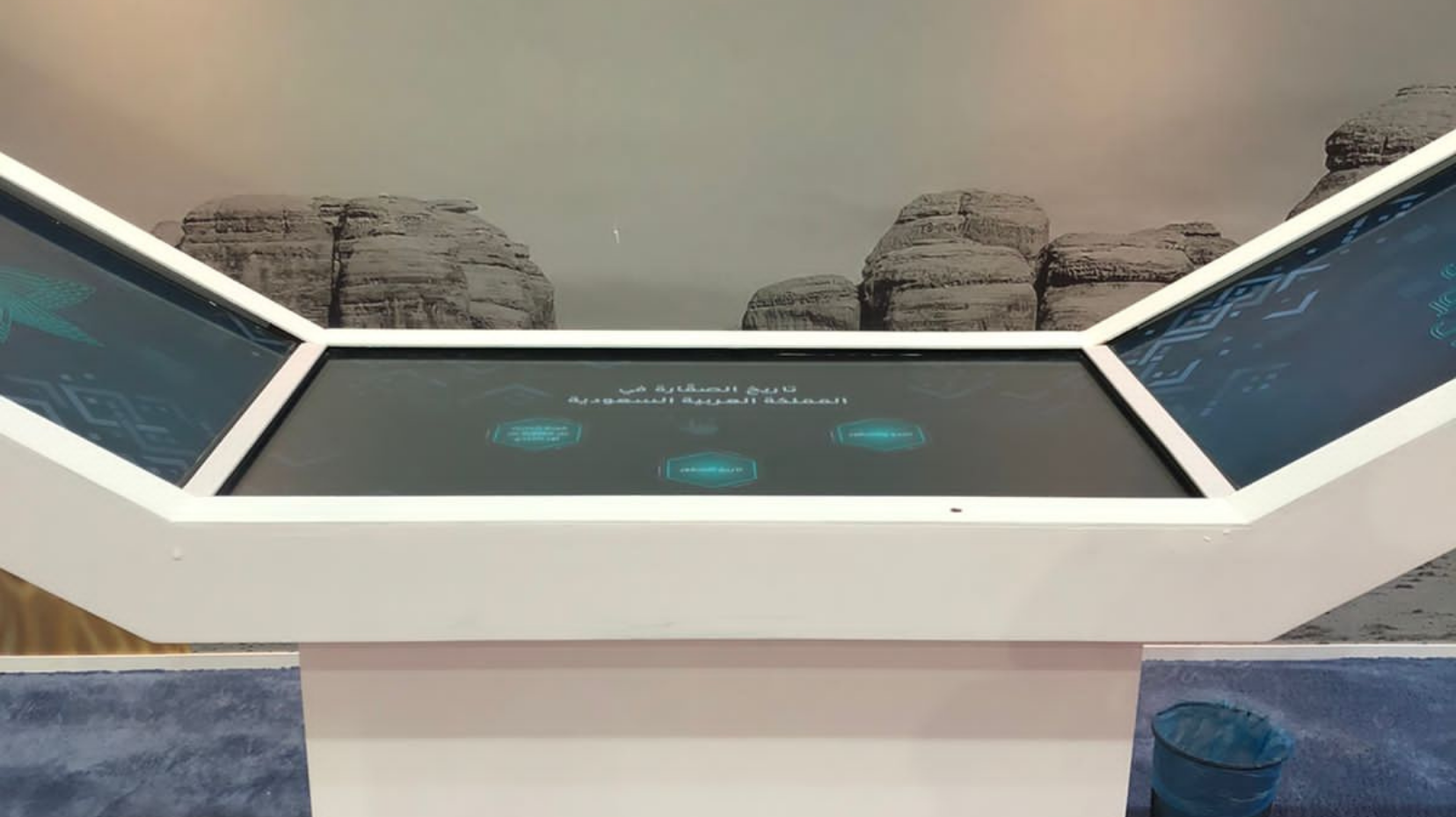 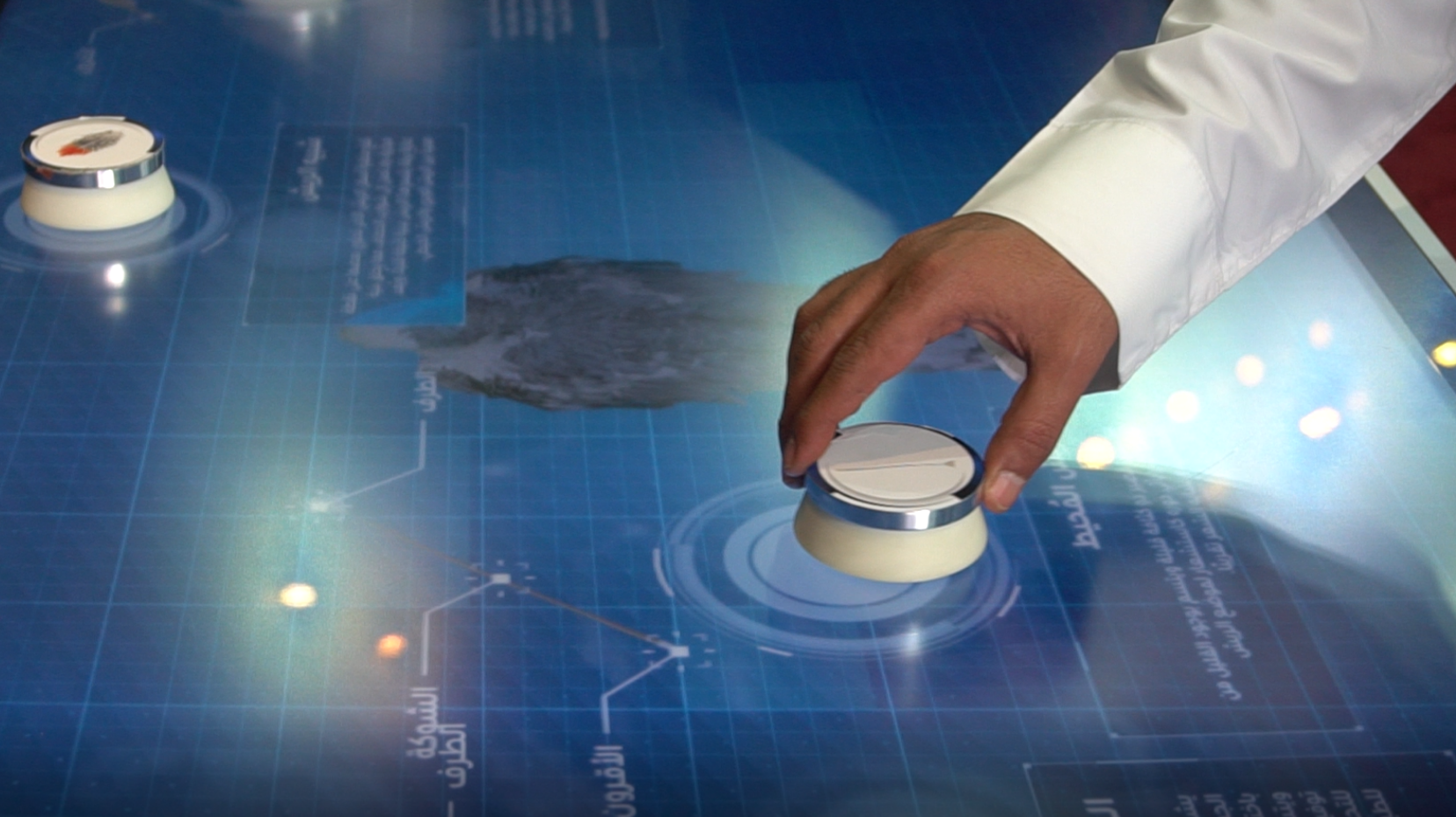 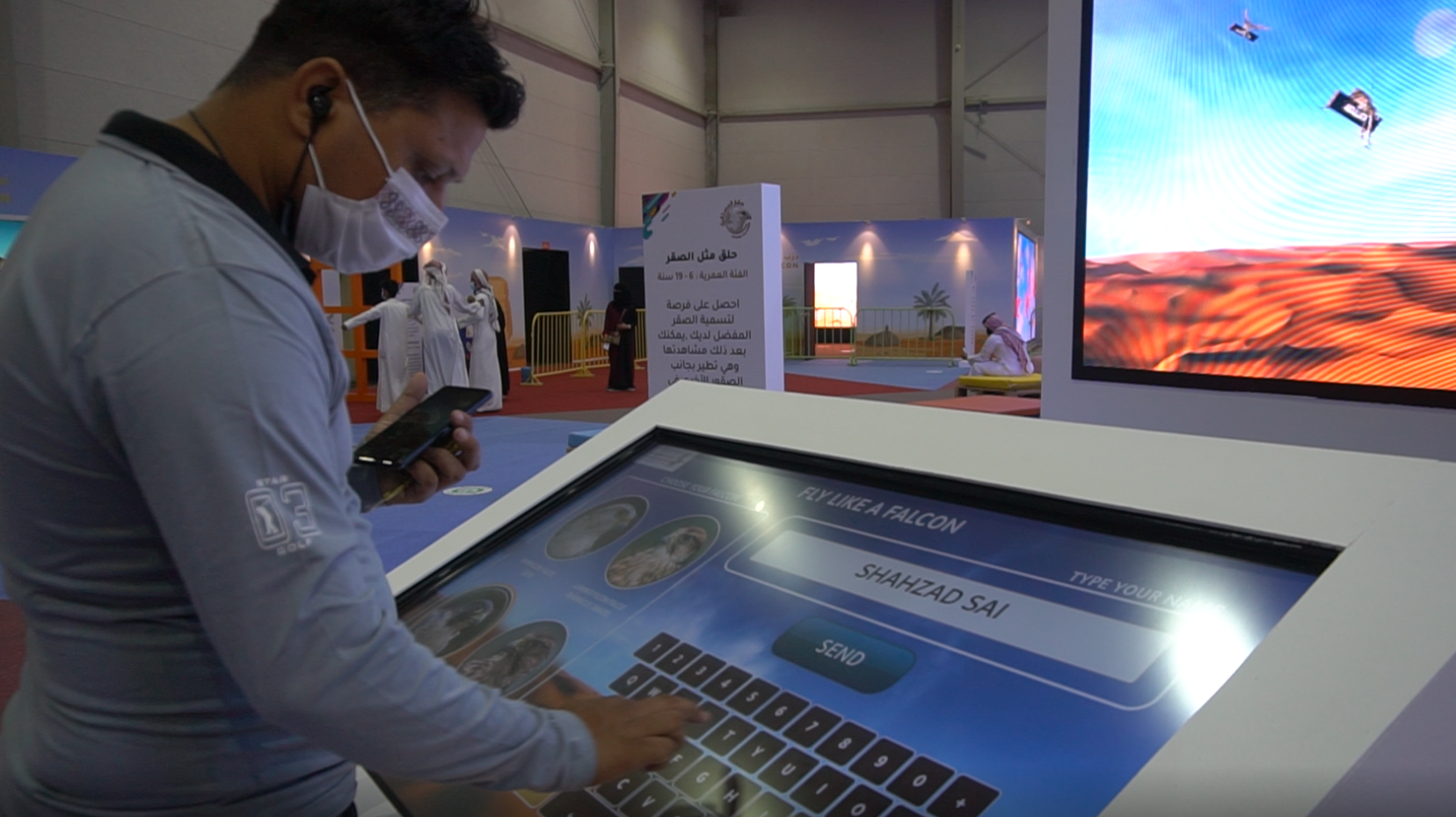 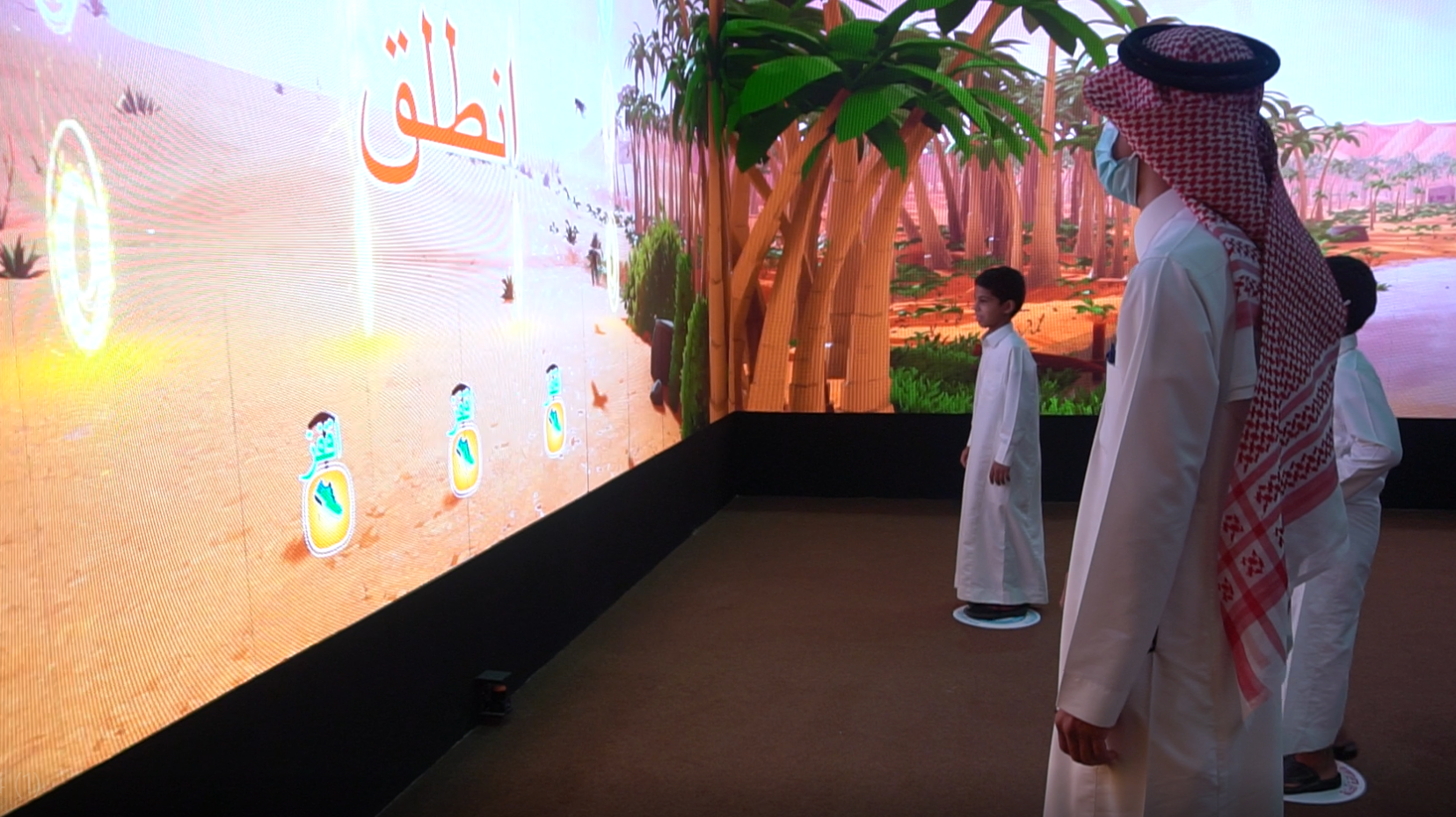 With a focus on communicating to multiple generations, the Saudi Falcon Club made it a priority to enable audience interaction by using the latest in advanced event technology. The Eventagrate technology artists and Red Events took the Falconry concepts under their wing to create unique, interactive activation spaces, connecting guests with the history, anatomy, and education surrounding falconry. Similar to that of a falcon, the Eventagrate team soared at high speeds with great accuracy and agility to deliver and adapt to the Saudi Falcon Club’s event needs. Take a look at some of the remarkable technology that was skilfully created:

This activation had kids wildly amused as they stepped into action to tame their falcons. The immersive exhibit was a large room filled with a large LED screen floor to ceiling to give young children and their parents the experience of a fully animated interactive day. They needed to watch the screen and search for the falcon with big "flashing lights" created using a laser sensor that appeared on the floor. Once the lights were discovered they jumped to step on them to tame the falcon. The activation was also designed to adapt to different children’s age groups to ensure each group had fun. This activity boosted the children's concentration and helped to promote a sense of hunting.

To emphasize a personal connection with falcons and enhance collaboration, users could choose their falcon and experience flying in the sky with other users on a large LED screen using touch screen technology. Guests could choose which type/species of falcon they preferred and then could enter their name and it would appear on the flying falcon placard. This activation echoed the club’s community and collaboration while reiterating the personal responsibility of preserving the future of falconry.

The falcon museum was designed to be of a somewhat digital aviary or rather a digital falcon mews. It featured multiple interactive areas where the birds of prey were brought to life. These areas showcased falconry history, global facts, types, anatomy, equipment, breeding, and the future of falconry. The Eventagrate team ingeniously designed unique digital activations to enhance collaboration, learning, and emotional connections through touch, sight, sound, and excitement. The interactive activations included:

To highlight the falcon’s different types of feathers, an object recognition table was created. This was an interactive activation that was created using a Displax Tile and an ultra-touch sensor. Benefiting from projected capacitive (PCAP) technology, object recognition detects objects and touch simultaneously like two separate events. This activation consisted of 7 objects, each object represented a different feather. Once you placed the object on the board and turned the object, a 3D model of the feathers appeared. You could then rotate the features to receive more facts about the type of feather.

These digital wings made quite the flap. Designed to imitate falcon wings, these digital wings used touch and throw technology to display information about the history of falconry around the globe. Visitors thoroughly enjoyed navigating through the pages using agile, swiping gestures moving the content from the middle to the left and the right-hand side of the screen.

Guests could explore all-encompassing storytelling, being immersed in the historical world of falconry. The Eventagrate team created a unique multi-media journey into a once-in-a-lifetime experience of learning about how falcons have evolved, making history fun and interactive. The digital immersive history room was created using an interactive touch screen and 3D model of a world globe. Guests could then select a country from the buttons on the small touch screen panel and this information would then travel to the large 3D model of the globe, transporting them into a different country each time.

To capture the story of falcon breeding, an interactive virtual book was designed which consisted of a projector, mini-PC, a high precision sensor, and this enabled intuitive user interaction. This interaction included scrolling through the virtual book pages, jumping directly to chapters, and playing out animations and videos about falcon breeding. Each page elegantly showed off the intricacies of the falcon reproduction journey.

What better way to showcase the future of falconry to the younger generation than with an Interactive Projection Wall. This was an interactive wall surface that displayed information about the future of falconry. Using projection mapping, each area of the wall was made to light up when triggered by touch lasers when guests walked by and this would reveal a particular falconry fact animation. Our team used a wall sticker to map the graphics and then applied touch lasers on the floor which triggered animated projections onto the wall when guests moved to specific points. This gave them the illusion that their interest in the graphics was triggering the illumination of animations.

To emphasize falcons being one of the fastest birds on earth, a human vs falcon digital running wall was created. This activation energized runners as they used their human speed to compete against the digital falcon on the screen. Guests could choose from a few different levels which had the digital falcon flying at different speeds. Guests were counted down by a digital starter and then ran as fast as they could on an athletics track, their time and speeds were calculated in real-time. A lidar sensor was used to trigger the goal and track times and the runners’ kilowatts were measured while running. Data was collected from runners before their race to establish their age and weight. From there kilowatts burned was measured.

Guests were transported through time as a digital history of falconry was displayed on large, immersive LED screens. As the guests walked alongside the screen so each date on the timeline would illuminate and provide information on that period. This was achieved using laser sensors connecting the position of the guest with the timeline section.

Using a looking glass and 3D mouse, guests could rotate the mouse and choose a number on the looking glass. The flying falcon in the 3D looking glass was particularly captivating as it only flew when a number was selected. Each number selected would then bring up different videos about falcons on the large LED screen.

Guests travelled to many different countries to find out about international Falconry using our Augmented Reality application. A large graphic print was installed which displayed countries national emblems. Guests could hover over the print with the iPad application and each country emblem would trigger information to appear alongside the emblem on the iPad but not on the print.

Motion activated LCD’s screens were used to display different information about Women Falconers Through History in different timelines. These vertical LCD screens had motion sensors that only displayed animated content once guests moved in front of them.

OLED, transparent touch screens were used to connect guests with a high quality, 3D model of a falcon hood. A falcon hood is used to cover the head of falcons when they are being trained to hunt. Using touch, guests could click on different areas of the falcon hood and rotate it to get more information about its function, composition and more.