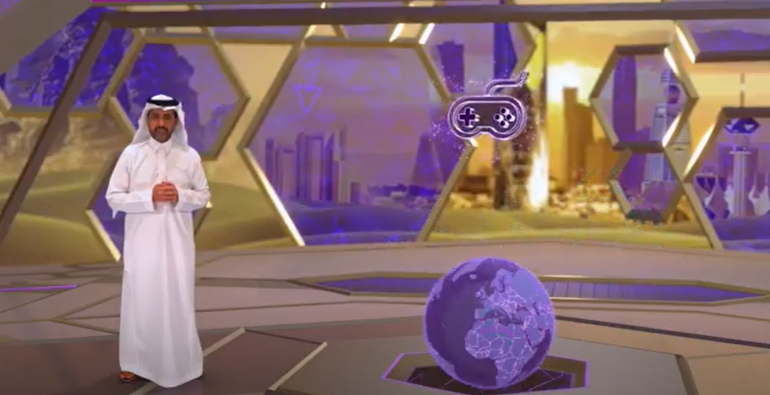 Eventagrate brings “Developers Zone - Gamers Without Borders” event together virtually for global awards ceremony Eventagrate had the privilege of working alongside the Saudi Ministry of Communication and Information Technology (MCIT) to bring gamers together despite international borders, for a virtual awards ceremony. The global competition titled “Developers Zone- Gamers Without Borders- No one is left behind” involved the participation of 1397 gaming developers from over 26 countries competing for the best online game. The Eventagrate team was honoured to be a part of this journey and created a fully virtual event with the focus on announcing the gaming developer winners, using virtual technology.

To enhance the feeling of a virtual gaming awards show, the Eventagrate team created a 3D MC Avatar who impersonated the event MC through speech, motions, and hand gestures. To capture the MC’s facial movements, facial motion recordings were taken which used a specific facial motion application (Face Mocap), recording the specific movement of the facial muscles. A separate voice recording of the speaker was then recorded and a detailed timed script enabled the Eventagrate team to skillfully match up the voice recordings, facial movements, and timed hand gestures. This was the captivating factor as the audience were watching the questions and answers on stage between a 3D MC and the competition jury in real life. “You should never underestimate your audiences’ connections with 3D characters. Many people associate themselves and build the emotional connection with specific virtual characters immersing their imaginations into their worlds.”, - Agalar (Head technology artist, Eventagrate). Technical accuracy coupled with artistic expression is what brought this character to life.

Eventagrate used its customizable virtual events platform technology to transform the awards ceremony into a futuristic cosmic space. They created a 3D Stage that included an event logo alongside MCIT’s which ran along a ticker box displayed above the speakers. This communicated brand awareness and highlighted the event initiative by the Ministry. The MCIT logo was also shown in 3D format which emerged from the stage reveal section, emphasizing that they were the main sponsors of the competition. The "Gamers Without Borders" branding included colors, font, and design look and feel. They were replicated into the 3D Stage Design to create a futuristic, lookalike experience.

Eventagrate’s experts customized a SAAS virtual platform to deliver end-to-end virtual production for the awards ceremony. This platform was used to manage attendee registrations and audience communication. Multiple speakers were managed and recorded using a green screen. Many hours of research and development went into designing the 3D MC avatar using facial motion recognition and recording. The true technique was matching up the 3D MC avatar with the actual speaker and ensuring that they were timed and imitated correctly while keeping in time with the overall production schedule.

The low latency streaming of this awards ceremony was particularly important as the audience were from different locations. Delayed content delivery or interrupted viewing was to be avoided. The announcement of the competition winners was streamed via Eventagrate’s virtual platform and through the clients' Twitter feed. The content delivery was secure and seamless, and the audience thoroughly enjoyed watching the winners being announced in real-time.